The Experiment Live
""For one night only, Thrill Laboratory present an experiment like no other: real scientists, amateur paranormal investigators, and the live exploration of a haunted building. University researchers have developed cutting-edge medical technology to monitor the effect of paranormal beliefs on the bodies and minds of those susceptible. Dr Brendan Dare brings to you the unpredictable results of their scientific research from the remote basement of a reputed Broad Street haunting. The Experiment will be captured by a film crew and transmitted real-time to a live cinema audience."
website here
Project summary
I was asked produce a horror soundtrack that could be shaped by biological-data, The bio data was captured by electronically by measuring pulse,breath and sweat (GRS) responses and transmitted  wirelessly to a hub computer. The composition made up of individual music tracks which can be modified in various ways, creating a changing horror sound track reacting to the highs and lows of emotions felt by five people during a filmed paranormal investigation.
For this i created two interlocking compositions who's different parts that could be highlighted and modified. These composition can be played singularly or an overture can be created from different parts of each.
For the composition I pulled out every horror cliche i could find. The general feel for the compositions over all was a pastiche ofJohn Carpenter horror sound tracks. The main piano theme itself is  a derivative of the Halloween soundtrack.
The tritone, also know the devil chords (diabolus in musica) is a well know technique for horror sound tracks,as well as apeggiating the notes up and down a semi tone. Low bass sounds, discordancy, creepy violins, sound effects such as thunder and creaking doors, as well as sound design using reverb, tape delays and stereo placement.
Each track was 46 seconds long, there were 16 tracks in total.

Posted by matthew olden at 01:48 No comments:

Posted by matthew olden at 01:48 No comments: 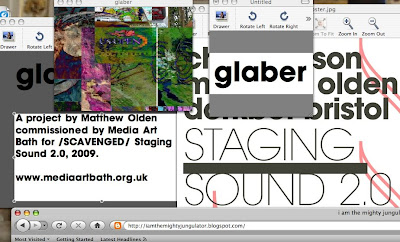 
the glaber is name after the naked mole rat.its real ugly..lives in the desert and is almost impervious to pain.
glaber the program makes music automaticaly from stuff it finds scurrying around internet.it searches for mp3's and jpeg and gifs...then mixes them up making a stream of music an images. each time differently
where does it gets it material from?
glaber already has some sounds and images  in it when you download it, so they always should start of sounding simular..after time they each become a different beast.no two performance are ever the same.
it gets its images from searching goolge images
and it gets it audio from serching.
http://www.podcastdirectory.com/
http://feeds.feedburner.com/phlow-magazine
and the media art bath resource page
it chooses its key words for searching by looking at the bbc news site looking for the latest headlines in science,world news,uk news,entertianment,politics and education
can i make it go full screen?
yes,press escape
does it put weird shit onto me 'puter?
no!.....it downloads all its stuff to (picturesdelete folder)or .it then searches through this to see what it can use and transports this stuff to (pictures folder)
the audio is downloaded directly to the audio folder
the program is standalone. that is to say you dont need to install anything to get it working.
where does it store its audio and images?
glabber stores its audio in the folder marked (:audio) and its visuals in the folder marked (:pictures)
if you add your own jpegs or giffs (in the pictures) or mp3s (in audio) glaber will use these to mix.
how do i look after glaber.
glaber has a folder of junk that need regulary emptying.you 'd think a proper programer would do this automaticaly, but the glaber is an untidy animal and needs a human to clean up the rubbish from the internet.
the folder that needs emptying and throwing away is (:picturesdelete )
is it new stuff each time?
glaber labels the media it collects sequentialy but chosses a different number to start from each time you start up.so eventualy you see a mix of all the data you have collected since you have downloaded glaber. but the media is loaded randomly,so no two performances are ever the same.
are they're any controls?
not realy..tis automatic.....thats the point.
but for the games cheats out there.....
heres some key controls
A Reload all
S New tempo
D New load o mutes
F keep at same setting
V carry on
G downloader on
B downloader off
H put in own search
escape full screen
are there/gonna be any updates?
yes watch this space
who made this program?
matthew olden, thats who....
he's got a website where you can see more stuff and download more stuff too....
tis here
what is glaber made in?
glaber is made in max/msp with jitter
it seems a bit slow.
glaber can slow down,but sure and steady.everytime you use it it gets more material,and each time you use it the more different (ish)itll be.sometimes slow internet ,heavy traffick,slow computers/full up computers/computers cause it to only download a few things a time.just keep it going......and itll be solid gone...
sometime the internet connection is too good and the visuals might judder whilst its loading too many visuals.
it doesnt seem to be downloading mp3's
it will its just sometimes there massive before gabber chops them down
its crashing...it wont start...
hmm...ill have a look.
sometimes dodgy media in the (pictures folder) or (audio folder) might do that.
check out yer audio settings
empty the (picturesdelete folder)
download it again
it need quicktime to be installed for the visuals inall......
how much space will it use up?
itll fill the folders up with 1500 items then start over writting em....
each time you start up glaber starts labeling at a different point, so material will build up over time
1500 audio files will take up about 4gigs worth of space eventualy....but itll take a long time
the picture folder when full will probly only be about a gigs worth of space...
if you think its getting too full free free to throw stuff away.
Posted by matthew olden at 01:48 No comments: 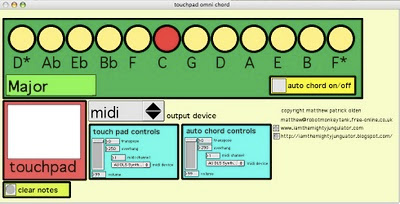 download for a mac
download for a pc
Its a virtual omnichord! heres the instructions....
the way it works is that each row of keys produces a chord, and when the keypad is stroked left to right it plays theses notes (over 4 octives). Like an omni chord you can play 72 different chords

with caps lock on

sorry if there isnt a major minor scale, dont realy know the terminolgy.....

it sends out through midi (use IAC for sending to summat like logic, or use the computers on board synth), or you can test it using sinewaves....
Posted by matthew olden at 01:47 No comments:

download for the mac
download for a pc
it creates a spinable 3d Harmonograph from 3 different audio waves, and makes very beutiful patterns.
I've put together a blogspot for it here, where you can find out more.
Posted by matthew olden at 01:47 No comments:

if you feel some of the stuff here is useful to you,do us a favour and donate.A pound is good,more is better...